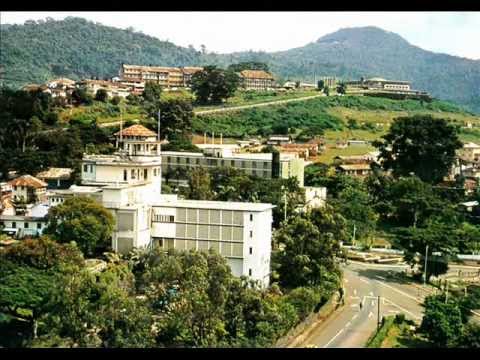 Freetown is the capital and largest city of Sierra Leone. It is a major port city on the Atlantic Ocean and is located in the Western Area of the country. The population of Freetown is ethnically, culturally, and religiously diverse. The city is home to a significant population of all of Sierra Leone's ethnic groups; Krio language is Freetown's primary language of communication and is by far the most widely spoken language in the city. Freetown has an abundance of historical landmarks. In downtown Freetown is the Connaught Hospital, the first hospital constructed in West Africa that incorporated. Nearby is "King's Gate", built in stone with a statement inscribed which reads "any slave who passes through this gate is declared a free man". Down by the Naval Wharf are slave steps carved out of stone. The Freetown peninsula is ringed by long stretches of white sand. Lumley Beach, on the western side of the peninsula, is a popular location for local parties and festivals. Also in Freetown are assorted beaches and markets, and the Sierra Leone Museum featuring the Ruiter Stone.

Like the rest of Sierra Leone, Freetown has a tropical climate with a rainy season from May through to October; the balance of the year represents the dry season. The beginning and end of the rainy season is marked by strong thunderstorms. Under the Köppen climate classification, Freetown has a tropical monsoon climate primarily due to the heavy amount of precipitation it receives during the rainy season. Freetown's high humidity is somewhat relieved November through to February by the famous Harmattan, a wind blowing from the Sahara Desert affording Freetown its coolest period of the year. Temperature extremes recorded in Freetown are from 15 °C (59 °F) to 38 °C (100 °F) all year. The average annual temperature is around 28 °C (82 °F).

The best time to go to Sierra Leone is in the dry season, which runs from October to May. January and February tend to be the hottest months. Birders will find December or January most rewarding. Travel is possible in June and late September although there will be heavy down pours and rural roads can become very muddy.

Friday night is club night in Freetown. That means that Freetonians dress up and party until the sun rises and di corpoh don. Clubs vary from very fancy and expensive to sweaty and low-key, but one thing is certain; fun is always guaranteed. This top 5 list has selected clubs where Freetonians can be found to party hard.

In the center of town lies a club that has a ‘people dancing wildly’ guarantee with a true Salon vibe. It is cheap, it is jam-packed, it is loud and certainly not for those who are afraid to get sweaty. Drinks can be bought in the store underneath the club. WhatsApp bar is lots of fun and perfect to get your party fever treated.

They say that those in the east know how to party. Well, the proof of that is the Twenty-Twenty club. Part of a larger complex with a restaurant, hotel and conference room, 2020 is so popular that it often reaches full capacity. That means 800 people dancing, playing pool, smoking shisha or being fancy in the VIP room. No need to worry about safety in the club; the club is located opposite of the police station that the owner of the club has helped rebuild.

Scarlett lounge has recently reopened after undergoing a drastic renovation. The club is part of the impressive Mamba Point Lagoonda Resort, which includes a cinema, restaurant, casino and a conference hall. What makes the Scarlett club so amazing is the experience that comes with it. The sound system is of superb quality, the interior dazzling and, last but not least, the lounge ‘floats’ above the Atlantic Ocean, offering a mesmerizing view whilst partying. The crowd is diverse, quite upscale and ready to dance. The best time to visit is from 11pm to about 2 or 3am.

232 Complex, or 232, is an entertainment complex affiliated with Heineken on Lumley beach road. It only opened this April and is already one of the most popular clubs in town, to the point that it often reaches maximum capacity. Apart from the club area they have an impressive beach bar where you can sip all sorts of tropical cocktails and, of course, Heineken beer. The DJ is great. Want to check it out? The club is known to be the ending point of the night, which means that its peak time is between 2am and 5am. And, in case you didn’t know: 232 is the country code for Sierra Leone.

The Warehouse has caused a stir in the Freetown night life. Impressive, as it has only been running for just over a year. Apart from good music, a nice variety of people and excellent service, they are by far the most creative with programming. From nights to popping champagne to haunted houses to Thursday reggae nights with free entry- the club keep the customers coming by offering different kinds of entertainment. Good for the diversity of the sometimes monotonous party nights in Freetown. And it has been praised; the Warehouse received the ‘Club of the Year’- award by the National Entertainment Awards held this year. What makes this club truly special though is the ethos of the three ladies that run Warehouse.