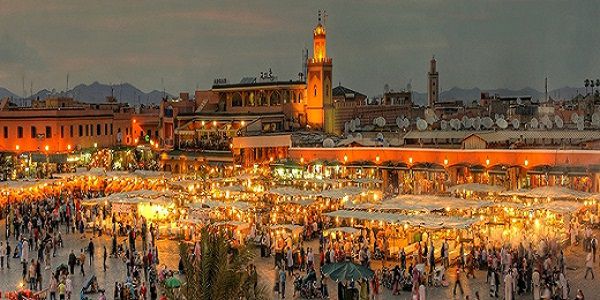 Marrakesh also known by the French spelling Marrakech is a major city of the Kingdom of Morocco. It is the fourth largest city in the country, after Casablanca, Fez and Tangier. It is the capital city of the mid-southwestern region of Marrakesh-Safi. Located in the north of the foot hills of the snow-capped Atlas Mountains, Marrakesh is possibly the most important of Morocco's four former imperial cities. The red walls of the city, and various buildings constructed in red sandstone, have given the city the nickname of the "Red City" or "Ochre City". Marrakesh grew rapidly and established itself as a cultural, religious, and trading center. Today it is one of the busiest cities in Africa and serves as a major economic center and tourist destination. Tourism is strongly advocated by the reigning Moroccan monarch with the goal of doubling the number of tourists visiting Morocco to 20 million by 2020. Marrakesh has the largest traditional market (souk) in Morocco, with some 18 souks selling wares ranging from traditional Berber carpets to modern consumer electronics. Marrakesh is one of North Africa’s largest centers of wildlife trade, despite the illegality of much of this trade. Tortoises are particularly popular for sale as pets but Barbary macaques and snakes can also be seen.

Marrakesh is served by Ménara International Airport and the Marrakesh railway station, which connects the city to Casablanca and northern Morocco. Marrakesh has several universities and schools, including Cadi Ayyad University. A number of Moroccan football clubs are located here.

Average temperatures range from 12 °C (54 °F) in the winter to 26–30 °C (79–86 °F) in the summer. The relatively wet winter and dry summer precipitation pattern of Marrakesh mirrors precipitation patterns found in Mediterranean climates. However, the city receives less rain than is typically found in a Mediterranean climate, resulting in a semi-arid climate classification.

The most pleasant time to explore Marrakech is spring (mid-March to May) when the roses bloom and the days are fresh and sunny. Next best is autumn (September to November), when the summer heat has subsided.

Marrakech is a former imperial city and one of the most popular cities for tourists in the Maghreb. It is home to beautiful mosques, palaces and gardens, as well as the famous Jemaa el-Fnaa square and souk market. With plenty of things to do and see in both the medieval and modern parts of town, Marrakech is a captivating city

Jemaa el-Fnaa is the main pulse of Marrakech. By day, the square buzzes with snake charmers, henna-tattoo artists and various other entertainers, while at night there are countless stalls boasting traditional lamb dishes and fresh orange juice, among other culinary delights.

One of the most popular locations in Morocco, the Jardin Majorelle is the creation of French painter Jacques Majorelle, who spent 40 years injecting his passion and creativity into this magical garden. Complete with enchanting little lanes, tranquil streams and over 300 species of stunning plants, Jardin Majorelle is perfect for those who need a break from the busy city.

A visit to a hammam will usually involve stripping down and immersing yourself in experiences such as a visit to the sauna, an exfoliating massage and a dip in an ice-cold pool.

Given the importance of mosques in Moroccan culture, the Koutoubia Mosque is a must-see for those in the area. The largest mosque in Marrakech, the Koutoubia is not only a spiritual center but a point of reference for international architecture

These tombs were created to stand as the final resting place for the many rulers and members of the Saadi dynasty. Magnificently decorated with bright tiles, Arabic calligraphy, and intricate carvings, Saadian Sultan Ahmed al-Mansour Eddahbi certainly spared no expense on his tomb, making for a beautiful site for tourists. Located just outside of Marrakech, the tombs are easy to reach, and a fantastic alternative to the bustling city.

With an overwhelming smell and many invitations from people in the streets, you’ll easily find your way there. Everything from bags to dresses is found here, and it’s wonderful to watch just how all the treasures are made. Visitors can watch workers as they hand dye material in preparation for trade in the city.

Marrakech is full of delightful museums, including the Dar si Said, which displays fantastic Moroccan architecture and objects. The Marrakech Museum, house in the Dar Menebhi Palace, boasts embroidery, weapons and contemporary art. For historical imagery of the city, visit the Maison de la Photgraphie.

On a trip to any Moroccan city, the enchanting souks are a must on the agenda. Marrakech is no exception. Labeled one of the most magical cities in the country, Marrakech boasts a full medina with traditional winding souks and countless treasures. Whether you’re looking for literature, handicrafts, or food, there’s a street and an alleyway for everything. So relax, explore, and discover some locally made treasures.

Madrasas, translating to ‘schools’, now stand all around Morocco as historical representations of the education of the past. This particular Quranic school, once the largest in North Africa, was dedicated to the teaching of Islamic law, and has stood since the 14th century. After almost six centuries, this medieval madrasa stands as one of the key tourist attractions of the city.

With plenty to do by day and by night, Marrakech is one of Morocco’s most popular tourist destinations. After night falls, there’s no reason for the fun to end; the Red City has heaps of great bars and clubs to keep you out until the small hours.

Faktory’z is a fairly new addition to the city’s night scene. The self-described coyote bar is open each night of the week until 2am, with energetic dancers showing their moves on the bar and in balconies and live music throbbing through the air. There’s a food menu too, with items like burgers, salads, and meat brochettes, although most people come for the drinks, dancing, and fun. L’Epicurien is a glamourous bar with live entertainment. Between the two resident DJs and the live band, the tunes are always crowd pleasers. Get up for a dance or sit and take in the sights over a few drinks, a night here is always fun. Nikki Beach is a complex of bars, restaurants, and swimming pools in the Palmeraies area of Marrakech. A casual-lux place to party in the evenings, the DJ keeps the crowd happy, enticing people onto the dance floor. Food is available too. 555 Famous Club packs a punch when it comes to the fun factor. The expensive prices are worth it for people who love to see and be seen. There are frequent promotions whereby ladies can drink for free or cheap, helping to keep costs down. Food is also served. SO Lounge is always filled with a fun-loving crowd. Sit next to the fountain and underneath the stars in the outside area or sway to the sounds from the DJ on the dance floor inside. A live band sometimes plays too. Marrakech’s Pacha is located close to the Agdal Gardens along the busy Avenue Mohammed VI. Open each night of the week, it is busiest at weekends, attracting tourists and locals alike. Open until late each night, the club can fit up to 3000 people at any given time. It regularly hosts guest DJs in addition to the resident DJs. For a sophisticated and classy night out in Marrakech, it’s hard to beat the refined Le Bar Churchill. Part of the five-star La Mamounia Palace Hotel, the bar oozes style and opulence. Open to hotel guests and non-residents alike, do note that a smart dress code is in place for the bar and all other public areas of the hotel. Ambient jazz music lilts through the air and monochrome portraits of jazz legends peer down from the luscious padded red leather walls. Open from Wednesdays to Saturdays each week, it’s a great place to get into the vibe before heading off elsewhere for late-night shenanigans. Mama Afrika is a hip spot to hang out in the evenings. The blended fruit smoothies and mocktails are so tasty, however, that you may well forget that there’s no liquor in your ‘cocktail.’ Serving an array of food too, it’s a top spot for eating, drinking, chatting, and chilling. There are regular live bands to keep the energy levels up. Bringing all the sensuality of Russia to the heart of Marrakech, Mariinski is sultry, sexy, and vibrant. Cabaret dancers clad in exotic attire, luxurious baroque decor, intricately carved woodwork, plush fabric, and an extensive drinks menu await you here. Chic with flashes of the erotic, it definitely promises to be a unique night out in the Red City. There are few better rooftop bars in Marrakech than the lovely Sky Bar. Perched atop the Renaissance Hotel, the bar is generally very busy. Food is available as well as drinks, and sunset is a particularly popular time to visit. Cheap Flight with Royal Air Maroc Flight to Marakesh

When it comes to finding flights to Marakesh that match your price range and itinerary, Royal Air Maroc UK gives you advantage of lowest rates on airfare and have leftover money to spare on your travel adventures. Book Royal Air Maroc cheap tickets and experience the ultimate luxury and comforts onboard! Find Royal Air Maroc flights online and save on airfares.