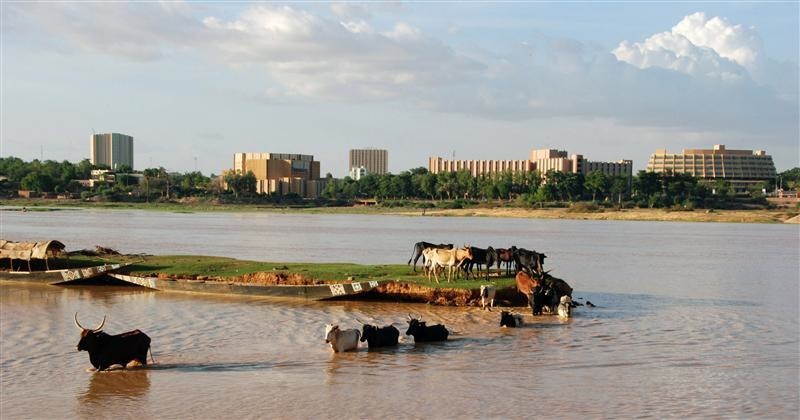 Niamey , the capital of Niger, is a lively, fairly modern city on the banks of the Niger River in the Tillaberi region in the far southwest of Niger. It is the administrative, cultural and economic hub and hence generally offers good facilities for tourists. Niamey offers unique open-air markets that are great for people watching—they’re patronized by members of the Tuareg Sonuri and Fulani tribes, as well as wrestling, one of the finest museums in Africa and the massive Grand Mosque. The official tourist office is located on the west side Ave. du Président Henry Luebke (Tel. 73 24 47) just north of Place de la Fraternité on the same block as the Direction de la Surveillance du Territoire.

Niamey has a hot and generally dry desert climate with a short rainy season from June to September when there can be severe thunderstorms with occasional flooding. Rains can be unpredictable though and sometimes the rainy season means just a few showers now and then. Average annual rainfall is around 550mm. The coolest and driest (and arguably best) weather of the year is between December and January with averages of 34/15°C (93/57°F) and no rainfall. In October, November and February the weather is hotter and still dry with 38°C (100°F) in the afternoon and 18-23°C (64-73°F) at night. March to May are the hottest months of the year topping out at 42°C (108°F) in the afternoon (although 45°C/114°F temps aren't uncommon) and a warm 25°C (77°F) at night; all three months can see just a few showers

As with much of West Africa, poor infrastructure leads to frequent flooding and miserable roads during the wet season, so it is best to avoid travel to Niamey from June–September especially if travelling to nearby countries which receive even more rain.

Most of the Western-style restaurants serve drinks, Restaurant Atlantique in particular have an amazing river view, especially great around sunset.

It's best to arrive just before sunset in this bar. Go in and get a drink plus street food at the cozy locals-only bar, when it gets dark. Then, go out on the street and shop for modern clothing in the glow of black lights amid the throngs of young men and women

A bar for the locals and has a great feel and is tucked away in the Nouveau Marché neighborhood. The beer is cold and they have great fare for lunch and dinner if you are interested in local food.

Pool-playing and casual atmosphere though it's definitely for wealthy locals and expats. Lebanese and western fare and great cocktails. If you don't mind the large number of prostitutes, the bar has some friendly people.

The Grand Hotel has also houses a popular bar with an Amazing river view, which is especially good around sunset. Jazz and happy hour brochettes on Thursday and Sunday nights.

There are three Burkinabé millet or sorghum beer bars (called dolo or tchouk), all in Yantala Ancien, behind the French Embassy.

When it comes to finding flights to Niamey that match your price range and itinerary, Royal Air Maroc UK gives you advantage of lowest rates on airfare and have leftover money to spare on your travel adventures. Book Royal Air Maroc cheap tickets and experience the ultimate luxury and comforts onboard! Find Royal Air Maroc flights online and save on airfares.